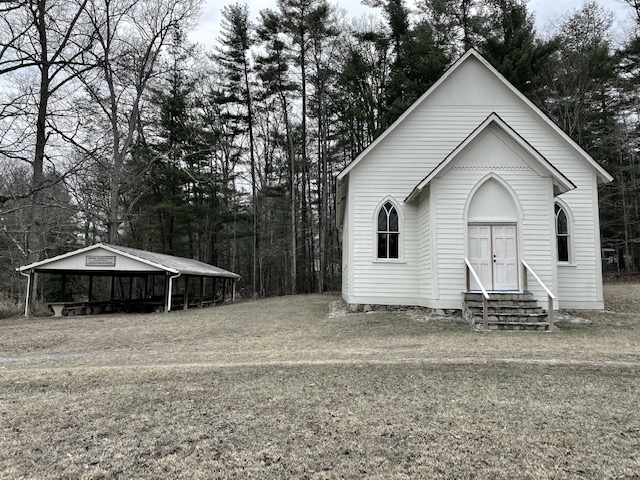 By 1865 the Christian faith had become an important part of life for many former slaves.  Prior to emancipation, many Blacks attended worship in White churches with White masters.  But with the end of the Civil War came a new freedom, and with this independence came a new sense of self-expression and concerning faith.  This was due in part to an increasingly inhospitable attitude at White churches, but more importantly, there was a growing, heartfelt need to worship in ways that would satisfy the people’s spirit.  In the outlying areas of Henderson County in 1865 few options for worship were available.   However, to a small group of people in the isolated area of Horseshoe, N.C., Christian worship was important enough that nothing would deter them from their dedication to building a church.  This congregation of believers became known as Shaw’s Creek African Methodist Episcopal Zion Church.

In 1865 this small group was given the opportunity to worship on the land of Mr. and Mrs. J. R. Leverette. They assembled on Sundays within the confines of a grove of trees next to a small stream called Shaw’s Creek. Sitting on logs and protected from the elements only by the trees around them, they shared their testimonies of faith, sang songs of praise, and offered prayers.  The hardships that the weather imposed on this small band led them to build a brush arbor under which they could carry on their worship.  Without money or land the group continued in their worship on the Leverette property.  Fortunately, the Leverettes proved to be even more generous and supportive, offering them the resources of the land to build a more permanent structure in which to worship.  With this opportunity, the men of the congregation began to fell trees during the day and in the evening they grooved them by the light of lanterns.  They rived the boards for a roof and began erecting the structure.  The women cooked and helped in many ways and as the men and women worked together they began to see the rewards of their labors.  When the exterior of the church was finished, they furnished the interior with rough-hewn log benches, a wood stove and kerosene lanterns.  With the church complete the people of Shaw’s Creek would begin a ministry that would last to this day.

The people of Shaw’s Creek had already chosen three men to serve as trustees for the church: John Wesley Logan, Alex Maxwell, and Frank Gash.  John Wesley was especially important to the church, serving as its minister for years in the absence of a full-time preacher.  Occasionally, a “circuit preacher,” Rev. C. C. Martin from Morrisville, Tennessee, 111 miles away, would come and preach on a Sunday, but for the most part worship would be carried on by the people themselves.   John Wesley was born in Horseshoe, North Carolina, on June 7,1853, and for most of his adult life until his death in May, 1929 he continued to give of himself to Shaw’s Creek.                  He displayed his leadership early on by encouraging the congregation to save money to purchase the two and one half acres of land around the church. For twenty-five years the people saved their money until in 1890 they had saved fifty dollars and bought the land from the Leverettes. Because of Wesley’s untiring work, the church was originally named Logan’s Chapel. The name was eventually changed to Shaw’s Creek African Methodist Episcopal Zion Church after the small stream that flowed through the property.

The humble beginnings and the faithful determination of the people of Shaw’s Creek would be an encouragement in the formation of other churches in Henderson County.  Out of Shaw’s Creek, St. Paul Tabernacle A.M.E. Zion Church would be founded in Hendersonville, NC.   Shaw’s Creek would never be a large congregation, due to the distance from Hendersonville that people had to travel to worship there.  But the church still carried on its ministry and was faithfully served by many ministers and their wives. Some who labored were: Rev. C. C. Martin, the first circuit preacher from Morristown, Tennessee; John Wesley Logan, the first stationary preacher; Reverends W. M. Anderson, S. L. Leake, Dr. A. C. Cooke, Frank Owenser, F. T. Roberts, C. W. Anthony, W. L. Yarborough, Rev. Mrs. L. M. Burchette, H. L. Marsh, J. L. Greene, Mack Williams, Robert Allen, Rev. Mrs. Twitty, W. L. Alexander, and Rev. Mary Jones.

Mrs. Hannah Logan Edwards, in her history of Shaw’s Creek, sums up the importance of this particular church in the religious life of Black people in Henderson County with these words:

“… the church doors remain open because of the faithful few who received the spiritual baton to pass on to others the message to preserve and safeguard the history of a humble beginning… (and) who have remained loyal to us because their forefathers had the faith, determination, and patience to make their dream a reality.”