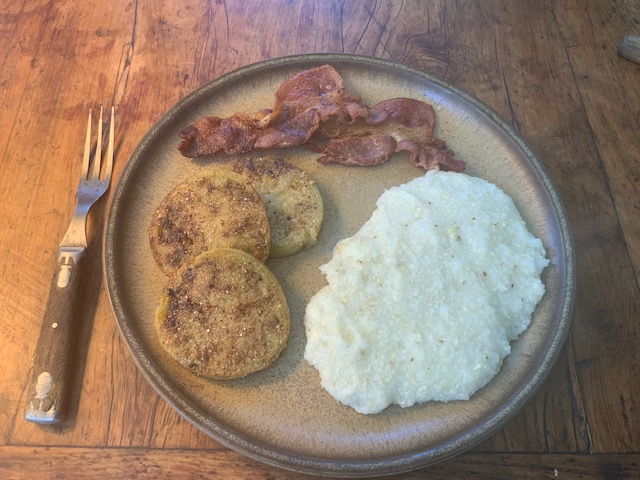 However, I do have memories of my granddaddy eating them and my grandmother preparing them for him. She would fix him fried green tomatoes, grits, and slices of fried fatback, along with coffee served in a bowl. If you ever wanted to be in the kitchen while “Gramma” (that’s what we called her) was cooking, you had to be still-quiet and out of the way. I sat on a chair set away from the wood-burning cook stove so I wouldn’t be peppered by hot grease. However, it was close enough to see, and that’s how I learned to make fried green tomatoes.

The tomatoes would be sliced thick, salted and peppered, setting on a plate. The skillet on the stove was hot and in it she would put lard, or grease from the fatback or bacon, or whatever oil there was. Right before she put the tomatoes in the skillet, she would reach up and pinch off a piece of dried cayenne pepper that hung on string near the stove where I sat. She would crush and sprinkle a bit of pepper over the tomatoes. Then she would use a fork to lay the tomatoes in the flour and meal mixture, dusting the sides before she laid them in the hot grease. Once they were browned on both sides and she would lay them on the plate and add the grits and the fried fatback or bacon.

If she cooked bacon I always sat back until it was finished because the grease popped way too much.

Beyond the Banks: Renaissance Woman
The Blue Goose