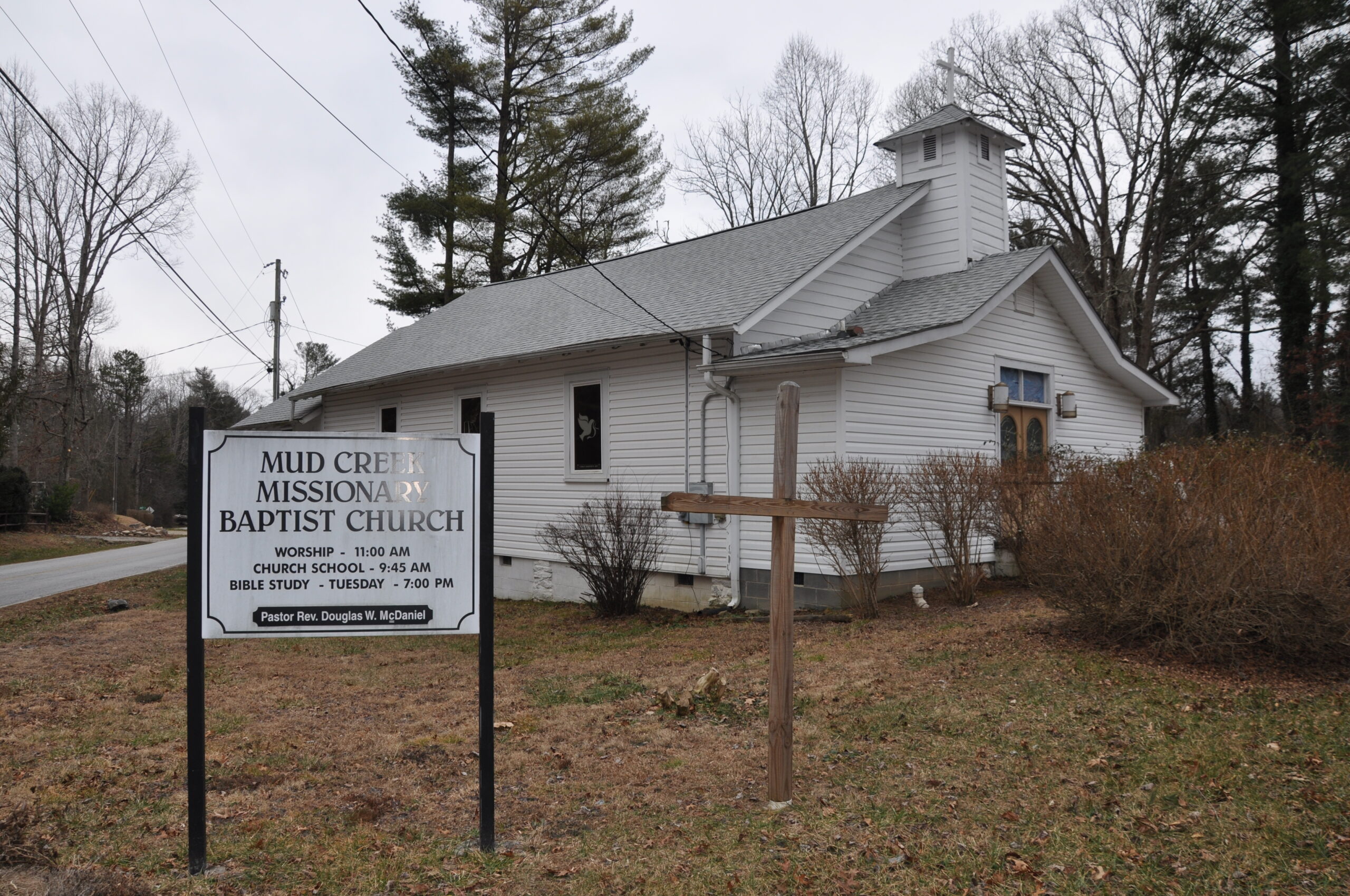 A fourteen-acre assembly ground with eleven buildings in East Flat Rock provided a training and social venue for members of African-American Missionary Baptist churches from Henderson, Buncombe and Transylvania counties.

From a small acorn a mighty oak can grow.” With these words, Mrs. Gertrude B. Forney sums up the place in Henderson County history that the Mud Creek Missionary Baptist Association has played in the religious life of many Black Baptist Churches for over 130 years in a three-county area (Henderson, Buncombe, and Transylvania) of Western North Carolina. Throughout her written history Mrs. Forney refers to the Association as the “Grand Old Tree,” her description of the growth and strength that Mud Creek has represented. The exact beginning place of the Association cannot be precisely placed but it is believed to have had its early start at the Nazareth Baptist Church in Asheville, N.C. The idea was originally put forth by four brothers who were also Baptist ministers: Calvin, Rueban, Charlie, and Frank Hemphill. Their idea was that an area association of Black Baptist churches would help to strengthen respective congregations through regular meetings designed for religious renewal, educational opportunity, and social fellowship. As the Hemphill brothers promoted their idea, seven Baptist churches agreed to join together to form the original membership. It was decided by the group to name their association the Mud Creek Missionary Baptist Association after the creek that ran through the Hendersonville and Flat Rock area that was said to always be running “muddy”. From these early beginnings, the Association would grow to include twenty churches with a combined total of 6,346 Baptists.

The Association began a steady increase in member churches through its infancy. In the early years the Association was guided by the efforts of several ministers besides the Hemphill brothers. Early accounts indicate that the Reverends Hughes, Hunt, Rice, Gordon, Anderson, and Burgan were all instrumental in the growth of the Mud Creek Association. The first Recording Secretary for which any history can be obtained was Professor W. M. Robinson who was the principal for the Sixth Avenue School and a much respected man in the Black community of Henderson County. He served the Association as Recording Secretary for twenty- three years, until his death in 1940. Professor Robinson’s role in the Association’s work is an example of how the leadership of the group was a combined clergy and laity effort with the laity playing key roles in the Association’s development.

By 1934 the Association had purchased fourteen acres of land next to the Mud Creek Baptist Church in East Flat Rock. It was decided in that year that steps needed to be taken to develop the land for expanded use by its member churches. This work on the buildings and the grounds continued for many years until in the pivotal year of 1942 a more concerted effort began on all aspects of the Assembly’s ministry. Prior to that year the Rev. T. J. Davis had served as Moderator from 1931-1933 and was succeeded by the Rev. E. W. Dixon, who would ably serve in the position of Moderator from 1934 until his death in January, 1950. It was during his leadership that a great deal of the development to the Assembly ground occurred. In 1942 the Baptist Assembly Improvement League was organized as an auxiliary to the Association. (An auxiliary was a term used for a committee and it was in the auxiliaries that much of the work of the Association took place.) Under the leadership of Mr. Thomas McMickens, the Improvement League brought the Assembly many inspirational programs and speakers. A fifty-voice choir under the direction of Mrs. Mamie Brannon was formed in that year. The year 1942 also saw the beginning of the first Training Institute at the Mud Creek Assembly grounds led by instructors from Shaw University from Raleigh, N.C. The Institute would continue to educate and inform the laity in biblical and religious matters each summer up through the mid 1950’s. The Institute held its sessions in the concession stand in back of the Assembly Hall. Leadership was provided by Shaw professors, including Dr. Tilly, Dr. B. K. Mason, Mrs. Ellen S. Alston and Mrs. McGrier. In 1942 the first King and Queen of the Talent Demonstration Program (later referred to as the Spring Festival) was held at the Mt. Zion Baptist Church in Asheville. 1942 was a watershed year for the Association as it broadened its scope of ministry through educational programs, inspirational gatherings and social interaction.

In 1951, The Reverend H. B. Ferguson was elected moderator with Rev. G. E. Weaver serving as Vice- moderator. Rev. Ferguson led the Association in what Mrs. Forney described as an “epic of achievements”. People labored to see that the Association continued to grow through the work of the auxiliaries or by such practical means as personally helping to maintain the land and property. For example, Rev. Ferguson and Rev. Weaver installed a new ceiling in the Assembly Hall in 1959. Another minister with an artistic gift, Rev. J. H. Sullivan, created a sign of welcome that was hung over the pulpit in the Assembly Hall. Mr. and Mrs. Zimmerman began a fund-drive to raise money for a new heating system in 1959. Mrs. Virginia Glenn sewed a tapestry for the choir stand in the Assembly Hall. These are some examples of how people stepped forward to address the need and personally see to its completion. Persons elected to leadership positions were honored as well, often serving in elected offices until their deaths. For instance, Mrs. Faye Mauldin served as either Corresponding Secretary or Recording Secretary for twenty-four years and Mrs. Bessie Gossett served as Corresponding Secretary for fifteen years; such was the dedication from individuals who kept the spirit of the Association high.

Mrs. Fomey sums up the contribution of persons who helped to make the Association an important part of life for Baptists in Western North Carolina this way: “As I review the history of our Association and see the names of some who were among the organizers that blazed the trail we now follow; we can truly say their works do live on. We were blessed with men and women of vision. We can never forget the contribution they made to this cause. History of this Association cannot be perfect because we are limited in our facts concerning it, but it can boast of a group of Christian workers with faith, works, prayer, and dignity.”